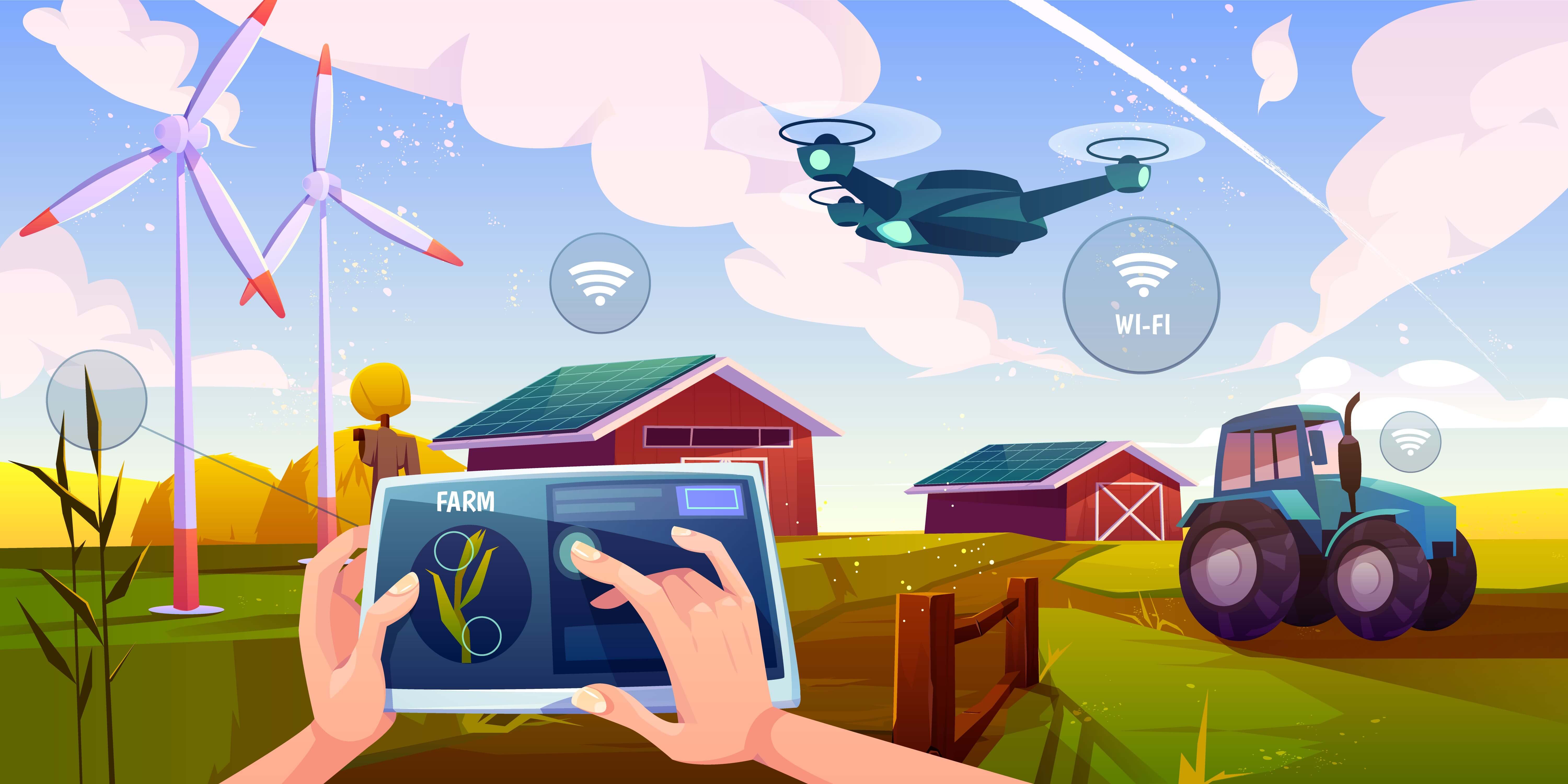 OVERVIEW OF THE AGRICULTURAL INDUSTRY IN INDIA

The service sector is declared to be the most substantial contributor to India's GDP. Our country reigns the world as the most prominent producer of pulses, milk, rice, wheat, sugarcane, spices, etc. These also add generous value to the economy with their activities in the agrarian sector. The Indian agricultural sector contributes a tremendous 18% to India's GDP (Gross Domestic Product). It is considered the prime source of livelihood for approximately 58% of the country's population, mainly for rural areas. Indian agriculture sector, along with forestry and fishing, results in a Gross Added Value of around Rs 18.55 lakh crore (US$265.51 billion) as of 2019. The agricultural sector expands with parallel industries at a growth rate of 2.1% (2019-20).

Regardless of Indian agriculture's contribution to the GDP, our country is yet to enhance productivity and efficiency in the sector to reach the highest potential. Several dimensions and concerns need to be identified, supported, and equipped with resolutions. Unsuitable methods for monitoring crops, water irrigation, using pesticides, and many other necessary farming activities are currently adopted. Resources are inadequate, not allotted according to weather conditions, or have not been exploited to their maximum potential—a reason why there is often a decline in the Return on Investment (ROI).

These hindrances have granted multiple opportunities for growth and development in the world of technology. The influence of technology in the agricultural sector has been invariably positive since its commencement. As governments and businesses across the country recognized the significance of food security and the consequences of environmental degradation, pollution, and water scarcity, the urgency to overcome certain obstacles arose.

Drone technology has gotten most of the recognition in the industry because of its diversity and considered the future for the agrarian community. The military initially used them. However, other sectors quickly embraced unmanned aerial vehicles (UAVs) when they learned about its widespread applications.

How can drones support Indian agriculture? Drones don't merely enhance overall performance but also encourage farmers to solve other assorted barriers and receive plenty of benefits through precision agriculture. With the market for agricultural drones reaching a whopping $1.3 billion, UAVs (unmanned aerial vehicles) fill the gap of human error and inefficiency by traditional farming methods. The purpose of adopting drone technology is to exclude any guesswork or ambiguity and instead focus on accurate and reliable information.

According to experts, the predicted world population will be 9 billion by 2050. Agricultural consumption is also said to increase simultaneously by nearly 70%. Drone technology, equipped with artificial intelligence (AI), machine learning (ML), and remote sensing features, are rising in demand because of its advantages. The central government has acknowledged the importance of unmanned aerial vehicles (UAVs), machine learning, and artificial intelligence with their 'Digital Sky Platform' online. Drone startups in India have used this opportunity to accomplish better technological capacities.

HOW DOES DRONE TECHNOLOGY WORK?

Only after complete recognition of drones characteristics can one gain in-depth knowledge about agriculture drones. Typically, drones include a navigation system, GPS, multiple sensors, high-quality cameras, programmable controllers, and tools for autonomous drones. The DJI is one such familiar drone utilized by the industry. Most farmers currently use satellite imagery as an introductory guide for farm management. Furnished with modern technology, Unmanned aerial vehicles (UAVs) can get more precise data than satellites for precision agriculture. They then process the data captured into agri-tech software to produce beneficial knowledge

Drones, including hyperspectral, thermal, or multispectral sensors, recognize areas that are too dry or need improvement by the farmer. Drone survey helps improve water efficiency and disclose potential pooling/leaks in irrigation by providing Irrigation monitoring yields calculations of the vegetation index to help realize the health of crops and emitted heat/energy.

It is crucial to track the health of the vegetation and spot bacterial/fungal plagues in the early stages. Agriculture drones can see which plants reflect different amounts of green light and Near-infrared spectroscopy (NIRS) light. This data helps produce multispectral images to track crop health. Quick monitoring and discoveries of any defects can help save crops. In circumstances of crop failure, the farmer can also document the damages for accurate insurance claims.

Agricultural drones fitted along with multispectral sensors and RGB sensors also detect field areas inflicted by weeds, infections, and pests. According to this data, the exact amounts of chemicals needed to fight these infestations are known, and this helps diminish the costs inflicted by the farmer.

Drone startups in India have invented drone-planting systems that allow drones to shoot pods, their seeds, and crucial nutrients into the soil. This technology doesn't only reduce costs by almost 85% but also increases consistency and efficiency.

Through drone crop spraying, human contact with such harmful chemicals is limited. Agri-drones can carry out this task much quicker than vehicles/airplanes. Drones with RGB sensors and multispectral sensors can precisely identify and treat problematic areas. Professionals say that aerial spraying is five times faster with drones when compared to other methods.

The drone survey allows the farmers not to keep track of their crops only but also monitor the movements of their cattle. Thermal sensor technology helps find lost animals and detect an injury or sickness. Drones can carry out this function favorably, and this adds comprehensively to the production of vegetation.

As innovators introduce new technologies, their commercial uses increase day by day. The government has been easing restrictions for drone usage and is supporting startups to come up with novel ideas. As drone surveys become more common, they also become more cost-effective. In agriculture, they have a plethora of advantages. Some are as follows:

Locust swarms are known to feed on crops, trees, and other types of plants. This feeding can destroy crops planted, causing famine and deprivation in societies that solely rely on these crops for survival. In recent times, swarms of locusts have invaded several areas in India, especially Rajasthan. With nearly 90,000 Hectares of land affected across 20 districts, these growing swarms are threatening to amplify into an agrarian disaster.

Most nations battling locust swarms rely significantly on organophosphate chemicals. These are utilized in little concentrated lots by vehicle-mounted and aerial sprayers. Rajasthan has stationed drones to carry out the spraying efficiently. Drones can diffuse pesticides on approximately 2.5-acres in merely 15 minutes. Using drones to combat the locust swarms is an immediate, secure, and practical approach.

As mentioned before, agricultural drone technology is undoubtedly the future of the Indian agrarian community. It can transform traditional farming methods in uncountable ways. Even though this technology is more complex to be familiar with, it will yield its results in no time once learned.

Farmers must understand the entire process. Determination of goals, creating an equilibrium in the drone and software utilized, and being familiar with the principles of using such technology will stand as a challenge. The farmers will inevitably need comprehensive training or partnerships with third-party experts in the drone industry for the acquisition of reliable data. Drones have changed the course of obtaining data in almost every type of industry, and will only deem to become bigger and better in the coming years.