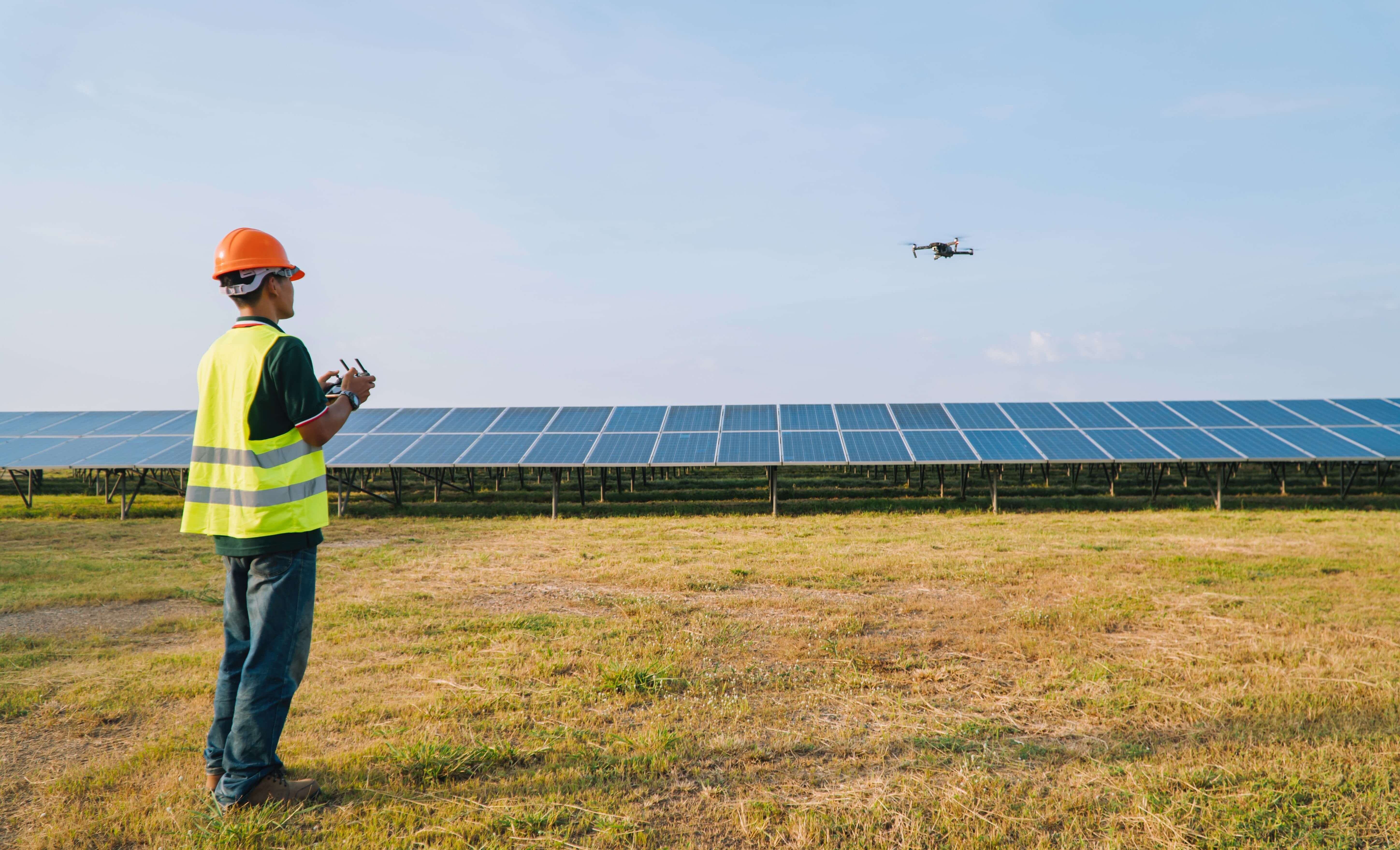 Our entire world's operations are extensively reliant on energy resources. However, their scarcity is often overlooked. This has stimulated a worldwide energy challenge and encouraged many to converge toward alternative energy sources for a better tomorrow. Photovoltaic Technology is a sustainable and eco-friendly technology advancing to make a difference in the renewable energy industry. The sun's radiation is said to have enormous potential in terms of energy output. Due to this very fact, photovoltaic systems have been developed to produce electric power by utilizing solar cells to transmute energy obtained from the sun to a flow of electrons using the photovoltaic effect.

With increasing photovoltaic plants and solar farms, the obligation to sustain their productivity in a cost-efficient and timely fashion has become a priority. Solar panel inspections are now backed with revolutionary Drone Survey Technology, visual and thermal aerial inspections , aerial infrared imaging, etc. Drone surveys in large photovoltaic plants have proven to be significantly valuable. Drone-powered solutions have granted practical, trustworthy, and high-resolution data, empowering PV systems to improve their operational efficiency. Along with drone-powered solutions, the renewable energy sector is not just sustainable but also unstoppable.

From the period between 1992 and 2018, the overall development of photovoltaic systems worldwide has been awe-inspiring. Remodeling from a modest market of applications to maturing into a mainstream electricity element, this renewable energy source supports countries across the globe. Twenty-eight countries of the European Union were said to have grown by a whopping 81% in 2019 regarding photovoltaic systems installations. Investments and R & D for such sustainable energy resources are at an all-time high and continue to grow as we see it.

Under the statistics furnished during a DJI webinar, nations such as Germany, Spain, France, Italy, and the Netherlands endeavor to produce more than 75% of all European photovoltaic energy by 2023.

To secure the advantage of the photovoltaic effect, all components installed must be thoroughly inspected and monitored. PV installations are fixed on the ground, rooftop, wall, or even left floating. However, these components are observed to warrant efficiency and safety through drone technology. Defected solar cells can diminish output and even damage other solar panel elements, generating enormous losses for the owner.

Although with the rise of solar panel inspections, diverse inspections are still manually executed, using handheld thermal cameras. Thermal cameras are popular because they can explicitly recognize any manufacturing defects, cracks, faulty components, faulty bypass-diodes, or even temporary shadowing on solar panels. Handheld monitoring is adequate; however, the approach can be made more efficient by fostering drone technology for solar farms inspections. By relying on drone imagery, users are guaranteed an enhanced quality of data, increased safety, and is time-efficiency. The following dimensions are why drones powered solutions are more reliable inspection methods than conventional/handheld procedures:

PV defects are described as components of the photovoltaic system that aren't perfect or up-to-par. A PV defect is different from a PV failure since it doesn't result in safety hazards or losses usually. A few common defects recognized during solar farm inspections are as follows;

Viewing UAVs' capabilities and the disadvantages of manual inspection techniques, drones can be declared a natural fit for solar farm inspections. The utilization of Drone Technology has developed rapidly in the renewable energy industry. Drones furnished with thermal cameras can operate and capture accurate thermal imagery along with geospatial metadata. Traditional visual and thermal inspection can be replaced with functional aerial infrared imaging.

For practical drone-powered solutions for photovoltaic systems, several conditions regarding specifications of cameras, sensors, and other elements must be met. For example, in RGB imagery, requirements like capturing aerial images vertically with a tilt optionally less than 3°, if followed, would yield meaningful data. Strong winds and other unfavorable conditions can significantly hinder stability and solar ray reflections, reshaping an RGB inspections' quality.

For thermal inspections, suggestions include utilizing a thermal camera with sensitivity in the 8–14μm band and favored thermal sensitivity below 0.08K to identify minute temperature variations, adequate solar irradiance for an appropriate thermal contrast (between 500W/m2 and 700W/m2), a viewing angle of 5° to 60° for the thermal camera's positioning, and no airflows. Operating UAVs early morning or in the evening to bypass unwanted reflections on the panel's surface and any shadowing from drones is also suggested.